A Brief History of Bimbia

Welcome to Exposing Bimbia.
This blog is dedicated to sharing information about my ongoing research which has broken the silence on a little known slave trade site in the Southwest of Cameroon, in an area called Bimbia. My research is also demonstrating that the territory now called Cameroon was not left untouched during the Transatlantic slave trade as history has taught us. To the contrary, the Cameroon territory was pillaged, especially the Grassfields.

New DNA technology has been able to trace Cameroon Diasporans who are the descendants of the enslaved in large numbers. I, and my team of volunteer student researchers, concomitantly, have been able to trace, to date, nearly 200 European slave ship voyages from the Cameroon territory. We have also tracked their voyages to nearly 20 disembarkations in countries outside of the African continent.

DNA Cameroonians are a significant numerical and cultural part of Africa's slavery Diaspora.  Many would like to reconnect and make their way back home. I hope this blog will help them do so, as we together share and learn more about Cameroon and the Transatlantic Slave Trade. I hope we can also heed the ancestors' call and make pilgrimages to Bimbia together. 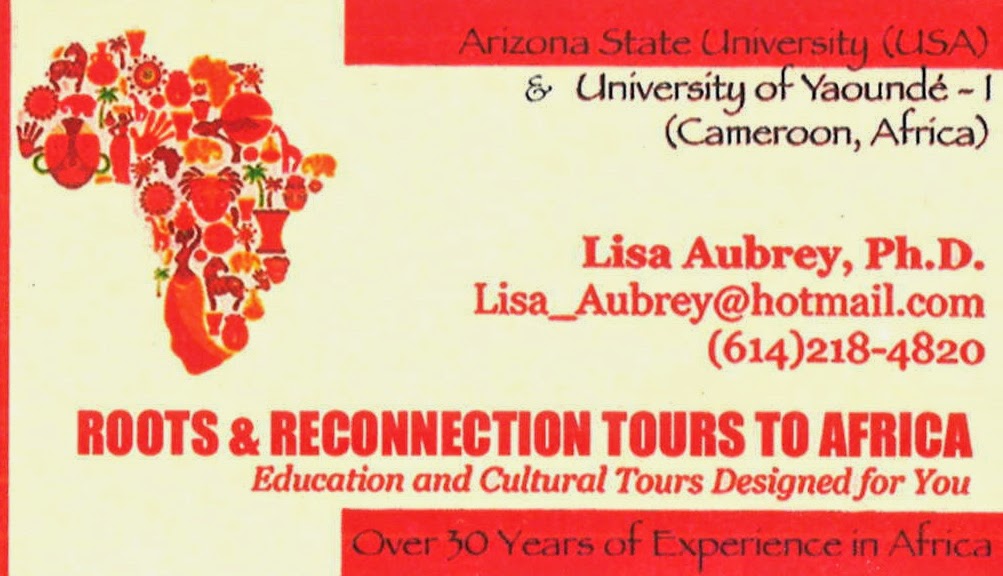 Dr. Lisa Aubrey is an Associate Professor of African and African American Studies and Political Science at Arizona State University where she joined the faculty in 2007 after having taught at Ohio University, Prairie View A & M University, and several other institutions. She teaches courses on politics, development, Diaspora, Africa's slave trades, democratization, NGOs, civil society, research methodologies, and gender in Africa and the African Diaspora. She is a former Senior Fulbright Scholar at the University of Ghana, Legon where she remains active. She is also a current Fulbright Scholar to Cameroon for the academic year 2014-15, where she will be based at University of Yaounde I from this September. Dr. Aubrey is also a former Research Associate at the Institute of Development Studies at the University of Nairobi, Kenya. She is the Founder and Executive Director of the Center for African and Diaspora Affairs (CADA) in Accra, Ghana. Dr. Aubrey divides her time between the USA and several African countries throughout the continent where she organizes institutional collaborations and Africa-Diaspora reconnection pilgrimages.

Her works include The Politics of Development Cooperation: NGOs, Gender, and Partnership in Kenya and various articles on topics including liberal democracy, race, development, gender-society, and the slave trades. Her current research focuses on Cameroon and Transatlantic Slave Trade.  In this research, she has located a slave trade site in the area of Bimbia in Southwest Cameroon which is drawing international attention, and which was recently recognized by the Cameroon government as National Historic and Heritage Site, the first of its kind in the country. Dr. Aubrey is also working toward UNESCO recognition of Bimbia as a World Heritage Site.  To date, she has been able to trace nearly 200 slave ship voyages that left the Cameroon territory in the 17th, 18th, and 19th centuries.  For many of these slave ship voyages, she has also traced their Diaspora disembarkations, and as well as many names and probable ethnicities of the enslaved. Dr. Aubrey has also been able to trace some of those Cameroon ethnicities to Louisiana, from where she hails and where she recently co-organized an Ancestral Burial Ground Veneration and Symposium in area called Promiseland. Dr. Aubrey is working with the Cameroon and USA governments and civil society to further research on the Bimbia slave trade site, for its global recognition and historic preservation.  She explains this work in a recent publication entitled "Exposing Cameroon’s Connection to the Transatlantic Slave Trade via its Slavery Diaspora and Bimbia: Research Impetus, Methodology, and Initial Findings." Dr. Aubrey asserts that there are other slave trade sites in Cameroon yet to be uncovered. She is working toward locating them and toward the creation of the Institute of Slave Trade and Diaspora Research.